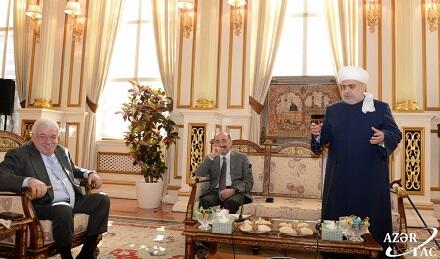 The next meeting with the participants of the conference "Baku-Moscow: Dialogue of Cultures", organized with the support of the Ministry of Culture of the Republic of Azerbaijan, Moscow government and TASS news agency, was held on January 25 at the residence of Sheikh-ul-Islam Allahshukur Pashazade.

Axar.az informs that, speaking at the meeting, Sheikh-ul-Islam Allahshukur Pashazadeh, Chairman of the Caucasian Muslims Office, said religion plays a very important role in the modern world and that religion is not a culturological role in societies, but religion.