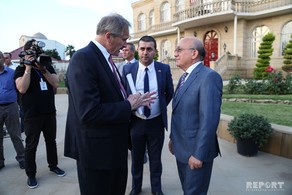 Iftar dinner on the occasion of holy month of Ramadan was organized at the residence of US Ambassador to Azerbaijan.

The event was attended by officials and representatives of religious communities in Azerbaijan, heads of accredited diplomatic corps in our country.

US Ambassador to Azerbaijan Robert F. Cekuta expressed gratitude the audience for accepting the invitation.

Ambassador noted that the month of Ramadan is a special day for all Muslims, including Muslims of Azerbaijan and the United States. He stressed that this year is also important because it has been declared the Year of multiculturalism in Azerbaijan.

"Azerbaijan plays an important role in the region and beyond," the US ambassador said.

R. Cekuta stated that Ramadan holiday is celebrated in the United States of America and the Muslim community, which has more than 3 million people, and according to forecasts, in 2050 will be doubled.