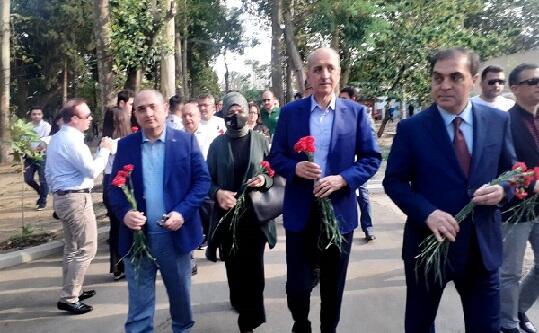 A delegation led by First Deputy Chairman of the ruling Justice and Development Party (AKP) Numan Kurtulmush is visiting Ganja.

Axar.az reports that the delegation got acquainted with the criminal scenes caused by irresponsible missile attacks by Armenia against innocent civilians and energy infrastructure.

As a sign of respect for the souls of the civilians who lost their lives here, they laid flowers and prayed in the ruined area.

The guests were informed about the terrorist acts committed by the Armenian Armed Forces in Ganja during the Patriotic War.

It should be noted that the AKP delegation led by Numan Kurtulmus will later visit the Imamzadeh Religious Complex and the Nizami Ganjavi Mausoleum Complex.