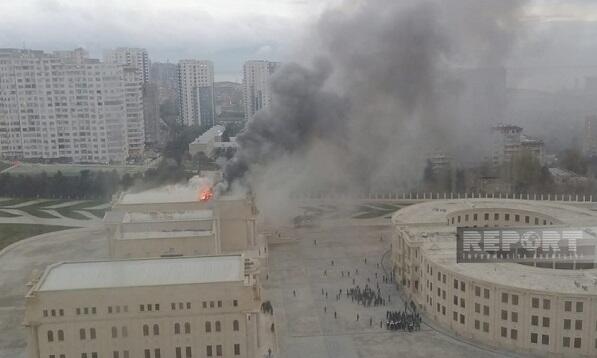 The "112" hotline of the Ministry of Emergency Situations (MES) received initial information about a fire on the roof of the administrative building of the State Border Service Academy on Ganja Avenue, Khatai District, Baku.

Axar.az reports that according to the information given by the MES, the fire protection units of the State Fire Protection Service of the MES and the relevant rescue forces of the Special Risk Rescue Service were involved on call. Currently, fire fighting is ongoing.

The State Border Service has released information about the fire that occurred in the building of the SBS Academy.

According to information provided by SBS Information Center, a fire incident occurred in the main building of the Academy on December 6 at 16:40.

Thanks to the necessary and urgent measures taken by the Ministry of Emergency Situations (MES), the fire on the roof of the administrative building of the State Border Service Academy located on Ganja avenue, Khatai district of the capital, was completely extinguished in a short time without allowing it to spread.

This was reported by the Press Service of the Ministry of Foreign Affairs.

The primary cause of the fire in the main building of the Academy of the State Border Service (SBS) is suspected to be a short circuit in the electrical line.

This was reported by the Press Center of DSC.