The conference focused on Karabakh truth 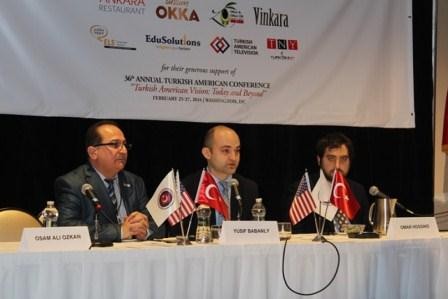 The truth on Karabakh was on the focus of the 36th annual conference of the Assembly of Turkish American Associations based in the U.S.

As the date of the conference was coincident with the 24th anniversary of the Khojaly genocide, Azerbaijan`s ambassador to the United States Elin Suleymanov, co-founder and member of the board of directors of the U.S. Azeris Network (USAN) Yusif Babanly addressed the event.

The Ambassador provided an insight into the Khojaly genocide, and spoke of its hard results. The diplomat said statements made by the Turkish President and Prime Minister on the anniversary of the Khojaly genocide, as well as the support of Turkish people were highly appreciated in Azerbaijan. The Ambassador noted that “genocide is not differs from the terrible tragedy like Srebrenica.” He stressed Srebrenica events took lives of only men, but among Khojaly victims there were women, children and elders. The Ambassador noted that the incumbent president of Armenia Serzh Sargsyan was personally involved in committing Khojaly genocide, and recalled the head of Armenian state`s confession to British journalist Thomas de Waal.

Addressing the event, USAN co-founder Yusif Babanly informed the attendees on the activity of the Network. He spoke of the U.S.-Azerbaijan strategic partnership and promotion campaigns aimed at delivering the truth on the Armenia-Azerbaijani conflict to the local community.