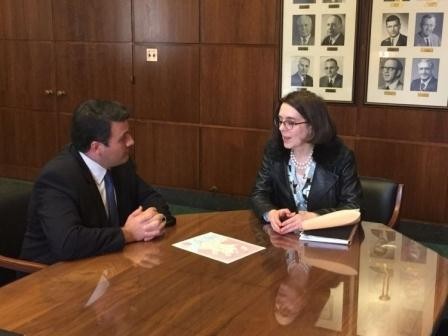 During his visit to the State of Oregon, Consul General of Azerbaijan in Los Angeles Nasimi Aghayev held a meeting with the Oregon State Governor Kate Brown. The meeting was also joined by Oregon State Senator Floyd Prozanski.

Consulate General told APA that prospects of mutual cooperation in various fields were discussed at the meeting. Informing the Governor about Azerbaijan’s steady development as a free and independent nation in a strategically important region, Consul General Aghayev stressed the great potential for fruitful cooperation between Azerbaijan and Oregon in a variety of areas, especially in the fields of port services, urban development, transportation, agriculture, IT, and education.

Highlighting also Azerbaijan's long-standing traditions of tolerance and positive multiculturalism, the Consul General spoke of peaceful and harmonious coexistence of various religions and ethnicities in the country. He expressed his hope that in light of the recent increase in religous and ethnic intolerance and violence in different parts of the world, Azerbaijan’s successful and internationally appreciated model of tolerance would inspire many others to follow towards a better and more peaceful world.

During his visit to the State, Aghayev also met Oregon Secretary of State Jeanne Atkins, various State Legislators, Mayor of Portland (the State’s largest city) Charlie Hales, as well as addressed a group of students at the Portland State University.