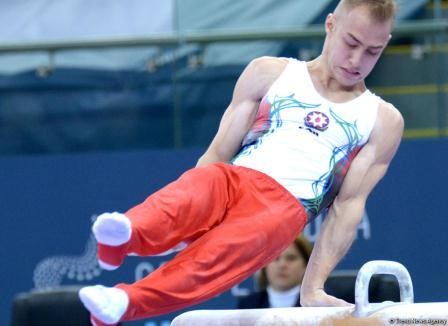 Azerbaijani gymnast Petro Pakhnyuk has advanced to finals in floor exercises at the FIG World Challenge Cup in Artistic Gymnastics in Baku.

Aside from Dolgopyat, Pakhnyuk and Shirai, one more gymnast from Israel and Japan each, as well as representatives of Slovenia, Croatia and Turkey advanced to finals.

The FIG World Challenge Cup in Artistic Gymnastics started in Baku on Feb. 19 and is to end Feb. 21. As many as 45 male and 22 female gymnasts will compete for medals in Apparatus Finals of the World Challenge Cup. In general, athletes from 19 countries will participate at the event.

Qualifications both among men and women on the first two days of the competitions will be followed by Apparatus Finals on the last day.