"New program is underway for development of football" 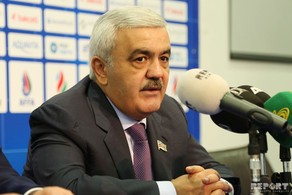 New program is being prepared for development of Azerbaijani football.

AFFA President Rovnag Abdullayev said after the elections for the post of Professional Football League president.

'The new program is planned by 2020. It is a short program. The public will be informed about it in September', R. Abdullayev said.

In the press conference, R.Abdullayev also stated that number of teams in the championship will be increased: 'Taking into consideration reduction in number of teams in the championship we have decided to hold a major tournament in Gabala in May with participation of the teams to prevent lower level match. We will present awards in the tournament to encourage the teams. We will organize this tournament to avoid cessation of championship during 4th Islamic Solidarity Games. Next year we will train 4 teams at I Division at least to increase number of Premier League teams.

Regarding reelection of Ramin Musayev to the post of president of Professional Football League, AFFA President said that last period was fair as well as works are being carried out to raise quality of refereeing, also, highest level trainings are being held. While commenting on lack of other candidates to the PFL president post, the association president stated: 'There were no other candidates. Running for this post requires great courage. I would like have an alternative candidates for the post'.

He also said that meeting of referees will be organized: 'Khagani Mammadov is responsible to properly organize training and appointment of referees. Our football has no biased decisions'.