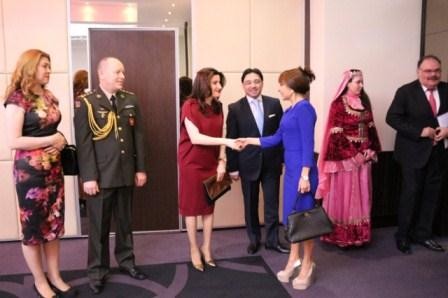 The Embassy of Azerbaijan in the United Kingdom has organized an official reception to mark 28 May – the Republic Day.

Co-chair of the Anglo-Azerbaijani Society on behalf of Azerbaijan, rector of Baku branch of the Lomonosov Moscow State University, Professor Nargiz Pashayeva and Vice-president of the Heydar Aliyev Foundation Leyla Aliyeva attended the event.

The event brought together state and government officials of the UK, representatives of the diplomatic corps accredited in London, as well as Her Majesty's Marshal of the Diplomatic Corps Alistair Harrison, Secretary General of the Socialist International Luis Ayala and representatives of Azerbaijani and Turkish societies.

Addressing the event, Azerbaijan`s Ambassador Tahir Taghizade provided an insight into the history of the Azerbaijan Democratic Republic, adding it was the first democratic republic in Muslim East. He also highlighted economic, social and political relations of Azerbaijan.

Touching upon bilateral ties between the UK and Azerbaijan, Tahir Taghizade hailed energy cooperation between the countries. The diplomat also praised the activity of the UK Prime Minister's Trade Envoy in Azerbaijan. He said there were wide opportunities for the development of the bilateral cooperation in the non-energy sector.

The Ambassador lauded the role of the Anglo-Azerbaijani Society and The European Azerbaijan Society in developing bilateral bonds between the two countries.

Director of the Eastern Europe and Central Asia Department of the Foreign and Commonwealth Office of the United Kingdom Michael Tatham noted that bilateral relations between the two countries were steadily developing. Michael Tatham said there was big potential for the further development of the bilateral ties, adding the UK government was interested in expanding relations with Azerbaijan.

The event participants also watched a documentary on Azerbaijan`s history and culture.