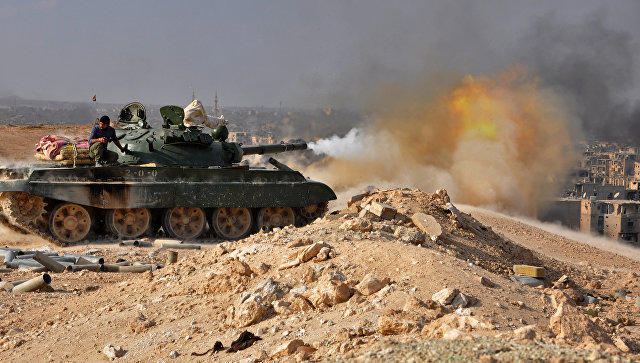 The Syrian government declared victory over Islamic State in the eastern city of Deir al-Zor on Friday, a big blow to the jihadists as their last stronghold in Syria crumbles.

Axar.az reports citing Reuters that, Deir al-Zor, on the west bank of the Euphrates River, is the largest and most important city in eastern Syria, and is the center of the country’s oil production.

“The armed forces, in cooperation with allied forces, liberated the city of Deir al-Zor completely from the clutches of the Daesh terrorist organization,” the military source said, using an Arabic acronym for Islamic State.

The army, backed by Russian bombers, Iran and Shi‘ite militias, is advancing toward the last significant town held by Islamic State in Syria, Albu Kamal, which is also located on the western bank of the Euphrates.

A rival offensive by Kurdish and Arab militias supported by a U.S.-led coalition with air strikes and special forces, is pressing Islamic State on the eastern bank.

Iraqi forces on Friday said they had begun their own final offensive against Islamic State on the Iraqi side of the jihadist territory that straddles the border between the two countries, entering the city of al-Qaim.

Islamic State had for years besieged a government enclave in Deir al-Zor until an army advance relieved it in early September, starting a battle for jihadist-held parts of the city.

The army captured al-Hamidiya, Sheikh Yassin, al-Ardhi and al-Rashidia districts in recent attacks and the al-Hawiqa district was the last to be held by the jihadists, a military media unit run by the army’s ally Hezbollah reported.

Engineering units were searching streets and buildings in those districts for mines and booby traps left by Islamic State, the military source said.