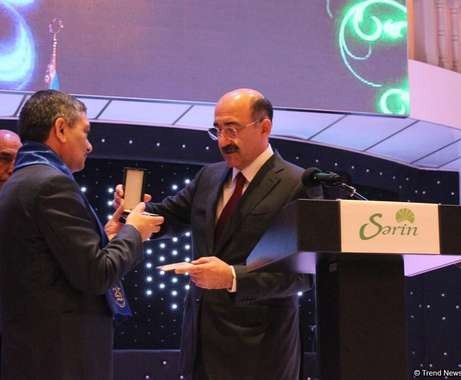 Guests enjoyed the exhibition featuring works by Azerbaijani cooks and Azerbaijan's Union of Artists, as well as the stands with photos showcasing the achievements of national cookeries.

Culture and Tourism Minister Abulfas Garayev, addressing the event, informed about ancient history of Azerbaijani cuisine and its traditions.

The minister said that Azerbaijani culture doesn't consist only from art, national carpets and music.

The minister announced that President Ilham Aliyev has signed an executive order conferring honorary title of “Honored Worker of Arts of the Republic of Azerbaijan” to national cooks Oruj Aliyev and Tahir Amiraslanov for the promotion of national cuisine.

“We have won the National Culinary Cup as well as gained first places at various competitions, prevented provocations of Armenia against our cuisine. We have published a book at the Council of Europe on Azerbaijani cuisine. My biggest desire and intention is to make Azerbaijan a culinary capital of the world,” he concluded.

Pilaf, a dish known throughout the world, is a course that is served during any big day in Azerbaijan.

While staying in Azerbaijan, tourists must taste “local pizza” or qutab – sugarless flour pancake stuffed with anything from meat, cheese and herbs to pumpkin. Qutab is always served with ayran, a cold yogurt beverage mixed with salt and herbs.

Azerbaijani sweets are something else. People who try it once cannot forget the taste and even try to cook pakhlavas and shakarbura in their home countries.