Obama on Trump: "He is nothing but a Bulsh-ter" 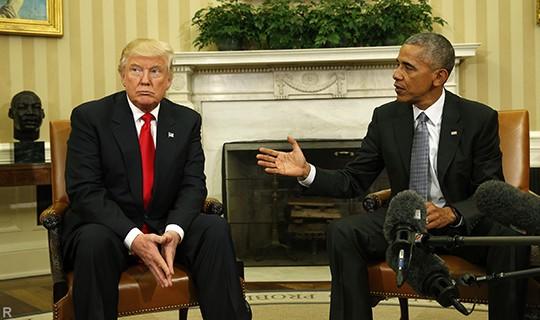 Cool, even-keeled, no-drama Barack Obama is one of the few people in the country who hasn’t publicly opined on the tweets and turmoil wrought by President Trump. And so a persistent question to those close to the former president is: What does Obama really think of the man now occupying the Oval Office?

“He’s nothing but a bullsh–ter,” Obama told two friends early last November, describing an election night phone call with Trump, in which the businessman suddenly professed his “respect” and “admiration” for Obama—after years of hectoring.

Speaking to PEOPLE for its new cover story on Obama and his wife Michelle adjusting to life outside the White House, the two friends quoted Obama’s blunt assessment of President-elect Trump. And how has Obama’s opinion changed since Trump been in office? “Well,” said one of the sources, “it hasn’t gotten any better.”

A third source close to Obama tells PEOPLE: “He’s deeply concerned with what he’s seen. But he’s also optimistic and heartened that citizens aren’t just watching it happen but engaging with neighbors and elected representatives at town halls.”

“Bulls—ter,” while head-turning, shouldn’t come as a huge surprise to anyone paying attention to Obama’s 2016 campaign rhetoric on Trump (“unfit,” “woefully unprepared” and “unacceptable”). But the former president has been meticulous since the election about not publicly violating that unwritten code of conduct among ex-presidents that bars criticizing whoever’s currently in the Oval Office.