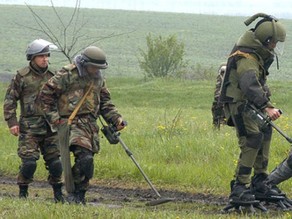 Several flexible groups have been established under the Azerbaijan National Agency for Mine Action (ANAMA) to carry out relevant urgent measures by the agency in regard with unexploded ordnances (UXO), which fall on the area as a result of firing the frontline settlements in the Western part of Azerbaijan by Armenian Armed Forces.

It was told in the press service of the Agency.

In accordance with the information received from 102 service of the Ministry of Internal Affairs, Crisis Management Centre of the Ministry of Emergency Situations as well as from Regional Executive Powers, the agency is carrying out emergency and urgent measures to ensure safety of the local population.