Azerbaijan will not accept the occupation of Karabakh 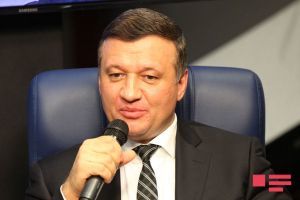 “The Nagorno-Karabakh conflict has not brought benefits to Armenia. Today, Armenians are leaving Armenia, immigrating to other countries”, - said the deputy of the State Duma of Russia, head of inter-parliamentary friendship group Azerbaijan-Russia Dmitry Savelyev at a round table dedicated to the 25th anniversary of independence of Azerbaijan.

Axar.az reports, according to APA, he said that Azerbaijan will never accept the occupation of Nagorno-Karabakh. The MP said that Russian society has not a detailed imagination about the conflict: "Imagine that you have a two-room house. An armed man comes and throws you, takes your house. Can you agree with that? That's not all. They occupied not only Nagorno-Karabakh region of Azerbaijan, but also seven adjacent areas. But what about this fact? If the Nagorno Karabakh region is disputed area, but what means the occupation of seven regions? So what do you expect from the people of Azerbaijan? That they would remained calm and silent? Never! Azerbaijan will never accept it”.