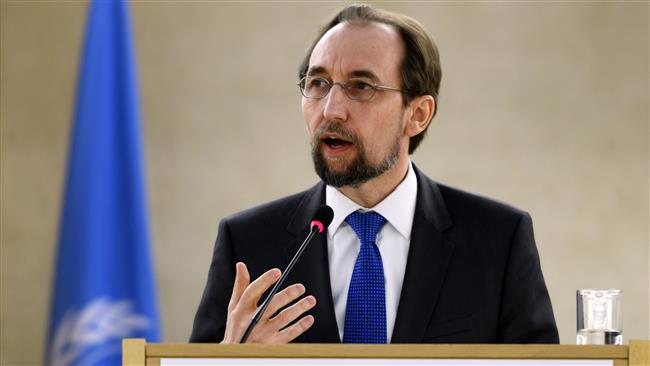 “I have been amazed by the President's openly voiced personal support for torture,” Zeid said at Vanderbilt University Law School students in Tennessee on Tuesday, calling the inhumane practice “repugnant” and “useless.”

During his campaign run, the new US president repeatedly expressed his support for torture and in particular the practice of waterboarding, or artificial drowning.

“The prospect that torture, or some airbrushed version of it, could be revived in this country, potentially in response to some future terrorist outrage, is profoundly unsettling,” Zeid said.

Zeid argued that leaders like Trump would only embrace torture out of anger and fear.

“Populists are using words to paint images of hordes of rapacious outsiders stealing jobs, engaged in crime and sowing terror; stories with clear villains and easy fixes,” he explained. “These are dangerous fabrications.”

Despite facing criticism, Trump reiterated his stance days after taking office in late January, saying that the practice of waterboarding “absolutely” worked as a means of extracting information from what he called terror suspects.

Before the November 8 face-off between Trump and his Democratic rival Hillary Clinton, Zeid had warned that the former reality TV star would be “dangerous from an international point of view.”

Counting Trump among “populists and demagogues” back then, Zeid also accused the billionaire Republican of endorsing Daesh (ISIL)-style tactics.

Zeid is a cousin to Jordan’s King Abdullah II, who met with Trump in Washington on Wednesday.

When pressed to clarify his view on torture, Trump said that he would defer to his Defense Secretary James Mattis on the issue, admitting that the Pentagon chief disagreed with him on the use of torture.

However, the situation seems ripe for the return of torture since Trump’s CIA Director Mike Pompeo has indicated that he would reconsider a ban on waterboarding if it impeded the “gathering of vital intelligence.”

Meanwhile, sources within the US government have reported that Trump is planning to reopen the CIA’s undocumented overseas prisons, known as "black sites," by repealing a series of executive orders by former President Barack Obama.

Gina Haspel, a veteran CIA service officer who ran one of the prisons, has been selected as the agency’s deputy director.