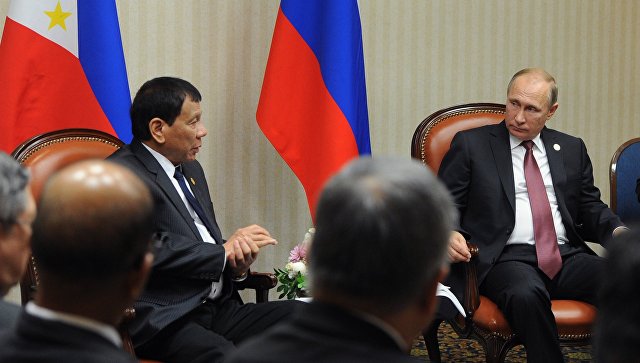 The Philippines need modern arms to fight the militants and Duterte expects Russian support, Duterte told Putin in a late night meeting Tuesday, according to the GMA News outlet.

"I'm sorry if I need to hurry up. I need to buy; if you can grant me a soft loan right now – the arms deal with America got cancelled," Rappler, an online news portal quoted Duterte as saying in his meeting with Putin.

A meeting scheduled for Wednesday between Duterte and Russian Prime Minister Dmitry Medvedev was canceled as Duterte returns to the Philippines to take control of security operation in Marawi.

Putin said he hoped the conflict in the Philippines would be resolved "with minimum losses", GMA said. He also said there were prospects for economic and military cooperation between Moscow and Manila.

Two soldiers and a policeman were killed, and 12 other wounded in the predominantly Muslim city of approximately 200,000 residents as members of the Maute militant group took control of buildings and set fire to a school, church and a detention facility, according to GMA News.

"The government is in full control of the situation and is fully aware that the Maute and similar groups have the capability, though limited, to disturb the peace," presidential spokesman Ernesto Abella said during a news conference in Moscow.

The militants "have shown no hesitation in causing havoc, taking innocent lives and destroying property”, he added.

The Maute and Abu Sayyaf militant groups have pledged allegiance to ISIS and have proved difficult for the military as Duterte seeks to drive out extremists and prevent radical extremist ideology from spreading in the Philippines.