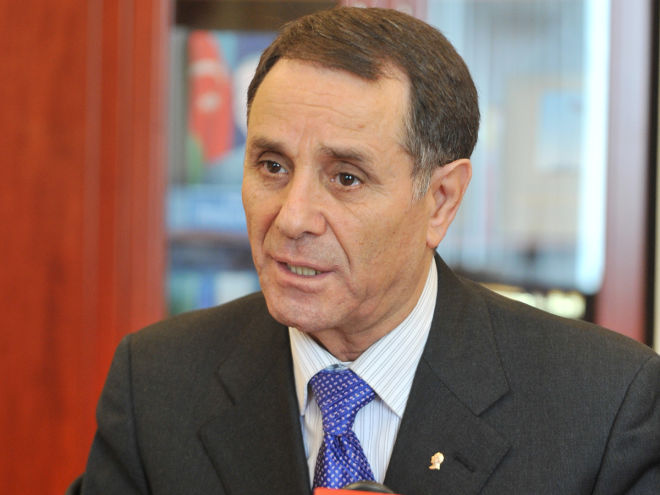 The Washington Times has published an article by the Assistant to the Azerbaijani President for Foreign Policy Issues Novruz Mammadov. Headlined "Azerbaijan, an American partner", the article says: "Azerbaijan has long been a partner of the United States. In the 26 years since we gained our independence, Azerbaijan has sought friendly relations with the United States. Formal bilateral relations were established with the sagacious efforts and diligence of the late president of Azerbaijan Heydar Aliyev and his American counterparts, U.S. Presidents George H.W Bush and Bill Clinton.

Axar.az reports citing Azertag that our relationship has continued — and indeed strengthened — over the years; guided by Azerbaijani President Ilham Aliyev and the American administrations of the 2000s. The backbone of our relations has been fortified around several key areas of mutual benefit and respect."

"Azerbaijan has been a significant partner in the American-led efforts to eradicate terrorism from our world. Immediately in the wake of 9/11 the late President Heydar Aliyev reached out to the United States and among the first, declared that his country would join America's fight against that evil.

The Secretary of Defense Robert Gates later in 2010: "Azerbaijan plays an important part in Afghanistan, not only in terms of the combat troops they have (in Afghanistan) — and also a civilian presence — but through ground transportation and allowing overflights."

"Azerbaijan is also among the chief financial contributors to NATO's Trust Fund for Afghanistan, and the country's peacekeeping contingent has provided boots-on-the-ground support to NATO-led missions in Afghanistan for more than a decade. As the Trump administration prepares its final push to purge al Qaeda from Afghanistan, Azerbaijan stands alongside both the United States and Afghanistan," Novruz Mammadov says in his article.

"Azerbaijan is a vital partner in the global oil and gas market, having emerged as a major player after the Baku-Tbilisi-Ceyhan (BTC) oil and Baku-Tbilisi-Erzurum (BTE) gas pipelines came online in 2006 and 2007, respectively. The BTC pipeline came to stream with robust endorsement from the United States.

Today, Azerbaijan's oil and gas exports play a crucial role in Western energy security. Not only does Azerbaijani oil flow to our shared European allies, it reaches refineries as far West as Philadelphia. We appreciate the support of the United States for the Southern Gas Corridor, which, when it comes online, will ensure a long-term natural gas supply to our shared European & NATO partners," the article says.

"Our country conducts foreign policy with predictable and trustworthy pragmatism. It has made us a standout partner for the United States as it pursues its own policy in — and cooperation with — the region. Our country is continually progressing toward modernization and consolidating its strong partnership with the United States."

"Azerbaijan's favorable position at the crossroads of the East-West allows our country to facilitate international and regional transportation and trade. The newly inaugurated Baku-Tbilisi-Kars railway line between Azerbaijan, Georgia and Turkey furthers Azerbaijan's policy of connectivity between Asia and Europe," the Azerbaijani President's Assistant adds.

"Last, but not least, Azerbaijan continues a long tradition of religious tolerance, which is the bedrock of our diverse society. Azerbaijan is a Muslim-majority nation of nearly 10 million people which is also home to other religions. Every one of our citizens enjoys protection of not only their government, but of Azerbaijan's culture of tolerance," Mammadov underlines.

With the establishment of the Azerbaijan Democratic Republic in 1918, Azerbaijan has emerged as a bold protector of democratic values, including secularism and voting rights for women in the region. Our country stands ready to defend the common values and interests shared between Azerbaijan and the United States and looks forward to a bright partnership, long into the future," Novruz Mammadov concludes.