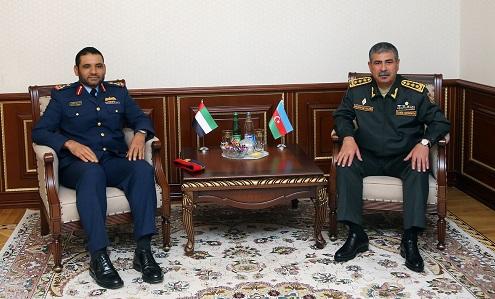 The Minister of Defense of the Republic of Azerbaijan, Colonel General Zakir Hasanov has met with the head of the delegation of the National Defense College of the United Arab Emirates (UAE), Brigadier General Salim Al-Shamsi on November 21.

Axar.az was informed in the press service of the Azerbaijani Ministry of Defence (MoD).

Touching upon the military-political situation in the region, the Minister of Defense informed the guest that Azerbaijan has been facing Armenian terrorism and separatism for many years, noting that Armenian terrorists conducted dozens of terrorist attacks against the peaceful population of our republic. The minister added that Armenia is a country that supports terrorism.

At the meeting, during which issues of cooperation in the field of military education, defense industry and military-technical sphere were discussed, it was noted that there are broad prospects for the development of this cooperation. It was stressed that, as in other areas, the expansion of cooperation between Azerbaijan and the UAE in the military sphere will make a worthy contribution to deepening relations between the two countries, and will also serve to strengthen peace, stability and security in the region.