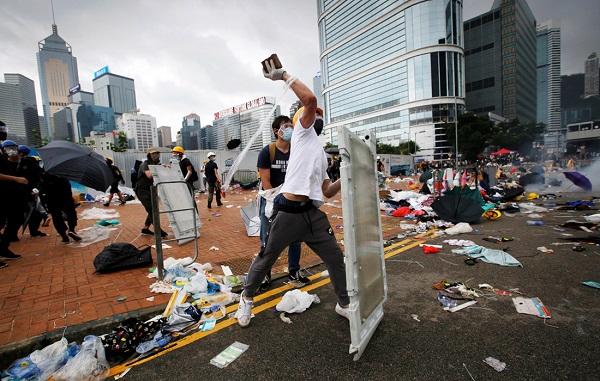 While the mass protests in the autonomous region of China, Hong Kong evolve into violence, the locals are concerned that the peaceful demonstrations transform into a conflict between civilians and security forces.

The daily life in Hong Kong, which has a population of 7.4 million, has been significantly disturbed by the protests as various public services varying from transportation, health to education have been interrupted.

According to official figures, some 3,560 people have been arrested so far and the public is worried about how long the protests would continue.

Company employees can not go to work in Hong Kong, often regarded as one of the fundamental pillars of the world finance centers, whereas shopkeepers can not do business. In addition, the protests have spread to universities already.

The locals told Anadolu Agency correspondent based in Hong Kong to "be careful" and did not respond to the questions on the civilian violence in the city.

Despite that Hong Kong is known for being active 24 hours a day, people have preferred to return home before it gets dark since the outbreak of the protests.

Notably, in addition to local shops, the global brands of technology, food and clothing brands refrain from opening their shops with fear of possible looting or damage.

Transportation has suffered a significant blow as well for the metro trains no long operate after 22.00 due to protests. In the protest-hit areas, police forces can suspend the metro without an early warning.

Locals of Hong Kong do not prefer to go out even at the weekends due to security concerns.

While the protests have been ongoing since start of this summer, the violence and clashes between protestors and police forces mounted in recent weeks.

Chow Tsz-lok, a 22-year-old university student, lost his life two days after he fell from a parking lot following the chase of police forces.

On Oct. 11, the policemen used live ammunition for the first time and a protestor was hit.