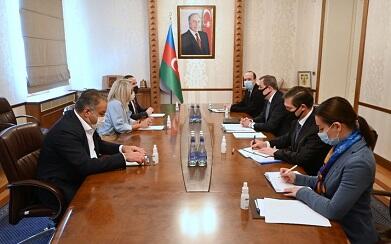 On September 22, Foreign Minister Jeyhun Bayramov received Portuguese Ambassador to Azerbaijan Paula Leal da Silva on the occasion of the completion of his diplomatic mission.

Axar.az informs that, the statement came from the Azerbaijani Foreign Ministry.

The meeting was also attended by Honorary Consul of Portugal to Azerbaijan Murad Rahimov.

Minister Jeyhun Bayramov praised the activities of the Portuguese ambassador, who contributed to the development of relations between the two countries. He noted that there are opportunities to expand relations between Azerbaijan and Portugal on a bilateral and multilateral basis. They stressed the importance of continuing the practice of political consultations between the Ministries of Foreign Affairs.

On behalf of his government, Ambassador Paula Leal da Silva congratulated Jeyhun Bayramov on his appointment as Minister. The ambassador said he spared no effort to further develop relations during his tenure in Azerbaijan. He thanked him for his support during his tenure.