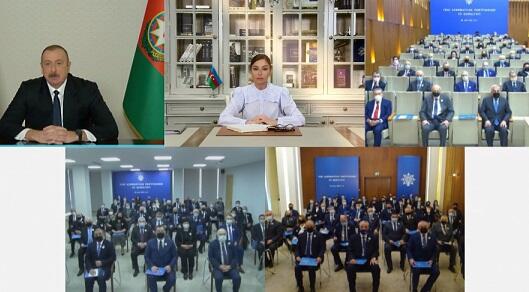 While analyzing that period correctly, we would have insured ourselves against any risks in the future. The young generation, who did not know that period and did not live at that time, should know at what cost we were able to maintain our independence. To whom we owe. If Heydar Aliyev had not come to power then, today maybe, Azerbaijan could live as a toy state, as a semi-colonial state under someone's control.

The President has stressed that Heydar Aliyev gave a political assessment to January 20 tragedy:

“Constitution was only adopted in the period of Heydar Aliyev. Censorship, censorship put by the Popular Front-Musavat duo was abolished namely by his instruction. Political reforms were started, a multi-party system emerged. We withdrew from international isolation. Azerbaijan started to be recognized as a respected and worthy of respect country. Great investments were attracted to our country, Army building was started. We did not have a regular army. Important steps were taken in connection with the training of personnel. Those personal which contribute to different fields of our country today.”