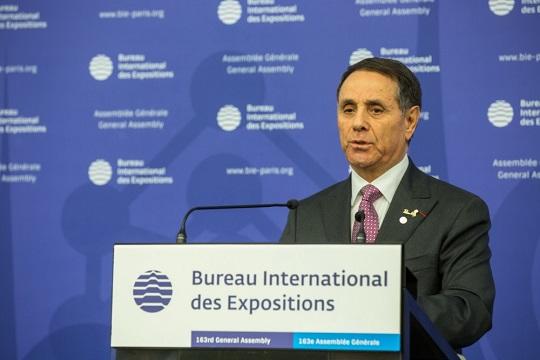 A presentation of Baku’s bid to host the World Expo 2025 was held at the 163rd Session of the General Assembly of the Bureau International des Expositions (BIE) in Paris on June 13.

Axar.az reports that it was noted at the presentation that Baku is ready to host the World Expo 2025, which is fully supported by the Azerbaijani people and welcomed by the youth with great enthusiasm.

The Azerbaijani delegation pointed out that the project proposed by Baku for the Expo 2025 has a diverse and universal significance.

“The general plan prepared for the World Expo is part of the renovation work intended for expanding Baku to the East. The theme of the project, “Developing Human Capital – Building a Better Future”, covers the spheres of health, education and employment, and is of interest to all countries, cultures and people,” the Azerbaijani said.

It was announced that the next session of the BIE General Assembly will be held in November 2018. At the session, representatives of the BIE member states will select by secret ballot the city to host the World Expo 2025.

Samir Sharifov, Azerbaijani Minister of Finance, Chairman of the Working Group on the nomination of Baku for the World exhibition in 2025 said that this presentation is an important opportunity to convey the wish of Azerbaijanis, especially Azerbaijani youth, to host the World Expo 2025.

Azerbaijan, which has been actively participating in six Expo exhibitions held by the International Exhibitions Bureau for 18 years and has won three awards for the high quality of the pavilions, demonstrates a strong commitment to Expo-movement.

If Baku is chosen, the World Expo 2025 will be held for six months from May 10 to November 10, 2025. It will be the first World exhibition of the International Exhibitions Bureau organized in the region.