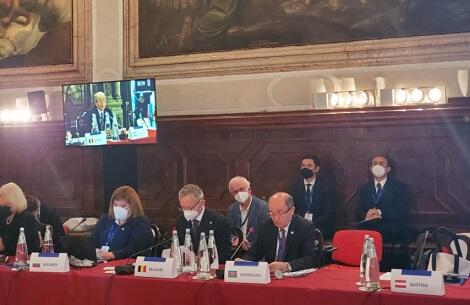 A conference of European justice ministers is currently being held in Venice.

Axar.az reports that Azerbaijani Justice Minister Fikrat Mammadov, who took part in the event, took the opportunity to expose the lies of the Armenian side by making baseless and fabricated allegations against our country.

Mammadov said that in response to the next military provocations of Armenia, which has been occupying our lands for almost 30 years, Azerbaijan has carried out counter-offensive operations based on the right of self-defense and liberated its lands from occupation by implementing known UN Security Council resolutions. It was noted that about 100 civilians, including 12 children, were killed and more than 400 were wounded as a result of the heavy artillery shelling of our civilians by Armenia, which was severely defeated on the battlefield, committing crimes against humanity and war crimes.

The Minister also noted that the International Court of Justice has recently rejected Armenia's unfounded claims and decided to take urgent measures to prevent human rights violations of Azerbaijanis in Armenia.