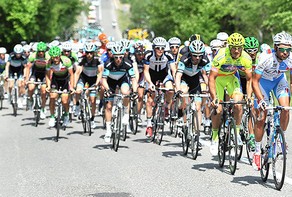 Today a press conference on Tour d'Azerbaidjan-2016 international cycling race was held in the Republican Velotrack.

Chairman of the Organizing Committee of the tour, the Azerbaijani Cycling Federation (ACF) vice-president Sahib Alakbarov and race technical director, the honorary Secretary General of the European Cycling Union Roland Hofer attended the event as well.

First, a video, when President Ilham Aliyev with his family has visited BMX stadium in the cycling park on the eve of the first European Games 2015 and then met with Synergy Baku team, was demonstrated.

Informing on the cycle race, Alakbarov said that it was an amazing sporting event, which played an important role in the promotion of Azerbaijan in the international arena.

Vice-President also spoke about goals of the team which will represent Azerbaijan.

In his turn, Mr. Hofer expressed his views and said that he was satisfied with the Velotrack: "I have visited many sport buildings, but this is distinguished by its originality. I am from Switzerland, and I have repeatedly visited Azerbaijan and participated in competitions. In contrast to my previous visits, this time I am involved as the technical director. 21 teams from different countries are involved in this competition."

Tour d'Azerbaidjan-2016 will be held on 4 - 8 May. The teams of Azerbaijan, Estonia, Germany, Switzerland, the US, Russia, Italy, Austria, Israel, Japan, Latvia, Kazakhstan, Slovakia, Dubai, Kuwait, Malaysia, Italy, Portugal will be involved in this sporting event.