Putin meets with Nurmagomedov and his father 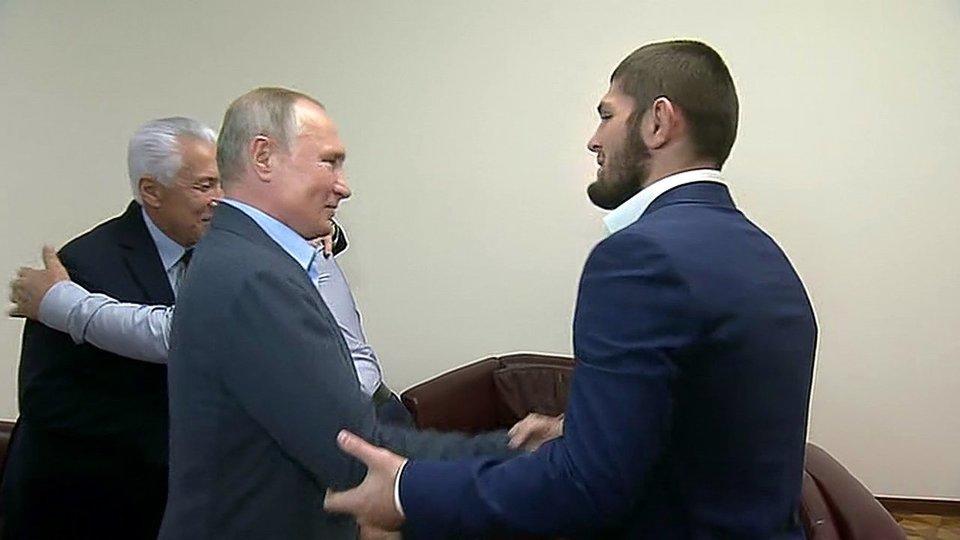 Russian President Vladimir Putin met with UFC Reigning Lightweight Champion Khabib Nurmagomedov and his father and coach Abdulmanap Nurmagomedov at the airport of Makhachkala in Dagestan.

The famed MMA fighter and his father arrived at the airport to see the Russian president off following his visit to the North Caucasus republic of Dagestan on Thursday.

Last Saturday, Nurmagomedov defended his champion’s belt in a title unification bout in Abu Dhabi against Dustin Poirier of the United States. The Russian defeated his US opponent with a submission in Round 3.

Putin warmly greeted the champion and gave hearty hugs to Khabib and his father Abdulmanap. Head of Dagestan Vladimir Vasilyev, who was also present at the meeting, did the same.

"I would like to congratulate you on your son’s victory," Putin said addressing Abdulmanap Nurmagomedov. "It was a decent fight and he is a strong and powerful fighter."

The president said it was a convincing victory and turning to Khabib he noted: "I congratulate you, it was a good fight, a beautiful one and an honest one."

"I saw a very good submission, a classical choke and you were not applying pressure on his throat," Putin continued. "No, really I saw that you applied pressure from both sides, the way it is supposed to be. It was fair."

The fighter shared with Putin his own emotions after the previous fight saying that his father was only one meter away from the cage and it was possible to talk to him. According to the fighter, after the bout was over his friends, who were there watching the fight and saw the winning submission, asked Khabib what he was talking about with his father.

"You spoke with your father and he told you to ‘finish’ him?" Khabib said laughing.

Abdulmanap Nurmagomedov added that throughout the bout he kept recommending his son not to fuss around.