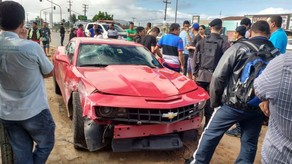 "Garabag" footballer Reynaldo Silva crashed in his homeland, Brazil. According to the Report's news, the incident occurred yesterday in the state of Agreste.

The striker driving his personal "Chevrolet Camaro hit the biker. As a result, the driver of the bike has broken left leg. The state of surgered biker is stable.

After the incident, Reynaldo helped the wounded biker and waited for police. Using of alcohol was not revealed.

Notably, Reynaldo plays in 'Garabag' FC since winter of 2013.