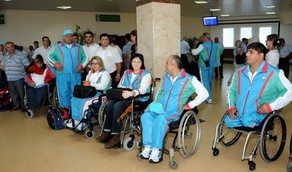 'Summer Paralympic Games will start in a few days. Successes, gained by our athletes at XXXI Summer Olympic Games, will be continued by the Paralympians'.

President of Azerbaijan National Paralympics Committee (ANPC) Ilgar Rahimov said at a meeting with the athletes, who will depart to Rio de Janeiro.

I.Rahimov said that the sportsmen have trained at high level.

ANPC President has announced a visit plan of the team and said that surprise is expected at the opening ceremony of the Paralympics: 'Our team will leave on September 2. On September 5, Azerbaijani flag will be raised at Paralympic Village. Two days later the opening ceremony will be held. Our captain, flag bearer is Ilham Zekiyev. We have prepared a surprise for the ceremony together with him. I'd like you to see our surprise despite late hours. 27 athletes will leave for Rio 2016 Paralympics. 6 of them are women. License number is 44. This figure is 6 athletes and 8 licenses more in comparison with London 2012. Our delegation mainly consists of youth'.

I.Rahimov also spoke about the additional 3 licenses issued to Azerbaijan: 'The decision has been taken not to allow the Russian national team at the Rio 2016 Paralympics at full staff due to the doping problem. We would like to be a rival to Russia, but decisions have already been taken. Therefore, we always keep issue of doping actual. I believe that our athletes will not face this problem in Brazil. Even a few athletes were checked here and gave negative results. It makes us happy'.

Then the committee president presented the awards to the parachute jumper female Paralympians, participating at the festival in Minsk, Belarus.

In the end, 'We are going to win' video of the Paralympians was demonstrated.