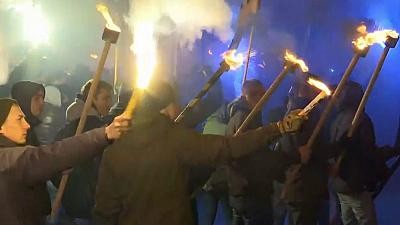 Thousands of activists, notably members and supporters of Ukraine’s far-right Azov regiment and the ultra-radical Right Sector group, have marched through Kyiv, brandishing banners and torches.

Azov volunteers made a name for themselves as paramilitaries, fighting pro-Russia separatists in the east of Ukraine, alongside the regular army, before being integrated into the National Guard.

Despite their symbol resembling a swastika, the regiment denies neo-Nazi sympathies.

Marching on the ‘Defender of Ukraine’ public holiday, members also said that they had formed a new political party, aimed at restoring national unity and patriotic pride.