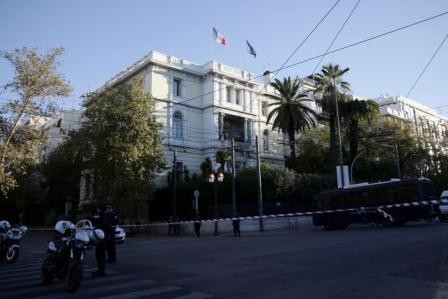 Unidentified attackers on a motorcycle threw an explosive device at the French embassy in central Athens on Thursday, wounding a guard, police said, in an attack that came less than a week before U.S. President Barack Obama visits the city.

"It was probably a hand grenade," one official told Reuters. "The building was not damaged, only externally, on the pavement. One officer, who was at the spot, was slightly injured."

The attackers were riding a motorcycle, according to footage from security cameras, another official said. The explosion was heard in central Athens.

There has been no claim of responsibility for the attack which happened at 5 a.m. (0300 GMT), police said. The area around the French embassy, opposite parliament, was cordoned off by police.

Small-scale attacks on businesses, police, politicians and embassies are frequent in Greece, with its long history of political violence.