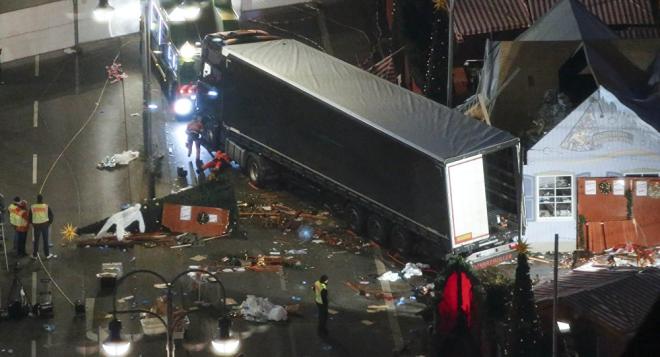 Fingerprints of the Tunisian suspect in the deadly attack in Berlin have been found on the door of the truck, which had rammed into a crowd.

On Monday, a truck rammed into a crowd at the Berlin Christmas market on the Breitscheidplatz square, killing 12 people and injuring over 40 others.

The German Prosecutor’s Office offered on Wednesday a reward of up to 100,000 euros (over $104,400) for leads that would help detain the suspect in the attack, Tunisian national Anis Amri. POLL Who is to blame for the Berlin Christmas market attack? Islamist terrorists. President-elect Donald Trump is right to say they must be "eradicated from the face of the Earth" Angela Merkel's immigration policy. Germany's "open door" has swung back in its face German police, they have no idea who they're looking for and "have arrested the wrong man" Vladimir Putin. Because why not? He's to blame for everything these days No one is to blame, you can't stop fanatic lone-wolf attackers All polls Anis Amri is currently being sought across Europe. According to Süddeutsche Zeitung, the suspect is 178 centimeters tall, has black hair and brown eyes. He could be violent and armed. Documents belonging to Anis Amri have been found in a wallet in the driver's cab in the truck, the media added. On Thursday morning, the police searched in a refugee camp in Emmerich, North Rhine-Westphalia. Amri was officially registered in the city. There have also been raids in Dortmund. The suspect in the Berlin attack made an application for asylum in Germany, however, it was rejected. Amri was to be deported this summer, but due to the lack of necessary papers he stayed in Germany. The security authorities in Berlin and North Rhine-Westphalia were already investigating his involvement in the preparation of a serious criminal offense, Süddeutsche Zeitung reported.