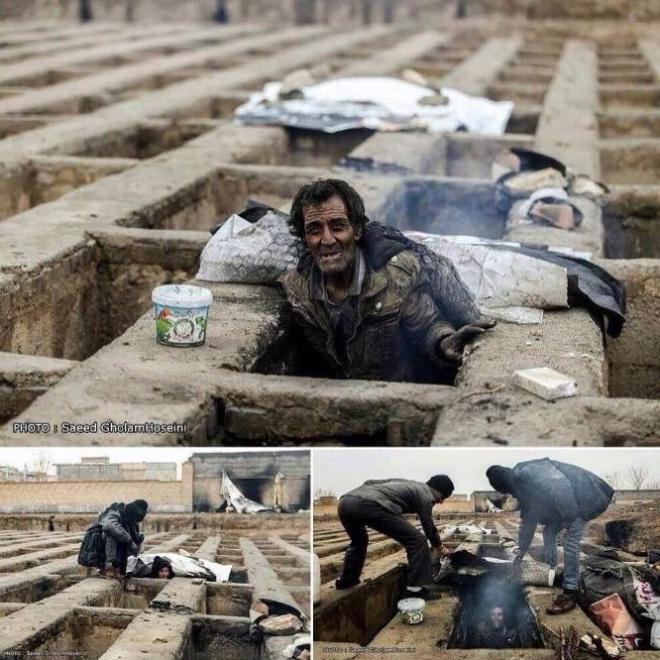 Images of homeless drug addicts living in empty graves just outside the Iranian capital have deeply shocked the public and prompted reactions even from President Hassan Rouhani.

Shahrvand newspaper on Tuesday published the images in a report on the homeless people -- about 50 men and women -- who dwell in a cemetery in the town of Shahriar, 30 kilometers west of Tehran.

The story and the haunting images of the homeless staring into the camera from inside the unused grave slots spread quickly on social media, where users and celebrities reacted with expressions of alarm and sadness.

Oscar-winning Iranian director Asghar Farhadi aired his frustration in a letter to Rouhani.

In a follow-up report, Shahrvand said the grave-dwellers were forcibly removed from the cemetery, after promises from authorities to resolve the issue.

Some of those who lived in the graves had done so for 10 years.

“Aren't we humans? Are we foreigners? We are Iranian too,” an unnamed homeless man told the newspaper in a video.
He asked authorities to build a shelter in the area.

The report is a rare glimpse into the lives of homeless people in the Iranian capital.

Poverty has worsened in recent years in Iran.

The official unemployment rate has risen to 12.7 percent this year from 10.6 percent in 2014, while joblessness among teens and young adults has reached 27 percent.