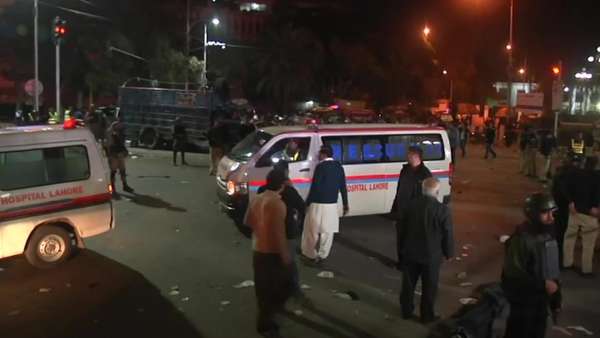 A top Pakistani bomb squad officer has been killed along with another policeman while trying to defuse a bomb in the southwestern city of Quetta, police said on Tuesday.

The commander of the city's bomb disposal unit and a colleague were killed late on Monday, hours after another blast killed at least 13 people and wounded more than 80 in the eastern city of Lahore.

The blasts were claimed by different militant factions and did not appear to be related. They came after a period of relative calm had bolstered hopes for an overall improvement in security.

"They died on the spot, their bodies blown up," Abdul Razzaq Cheema, deputy inspector general of police in Quetta, said of the two officers.

In the eastern city of Lahore, police were combing the site of the Monday suicide bomb blast that went off in the midst of a protest by chemists and pharmaceuticals manufacturers, near the provincial assembly.

A militant group called Jamaat-ur-Ahrar, a faction of the Pakistani Taliban who have been battling the state for years, claimed responsibility.

Five policemen were also among the 13 dead in Lahore.

The Jamaat-ur-Ahrar faction, which killed more than 70 people in a Lahore park in an Easter Day bombing last year, said the attack marked the start of a new campaign to target government departments and officials.

"You are on our target across the country," the group said.