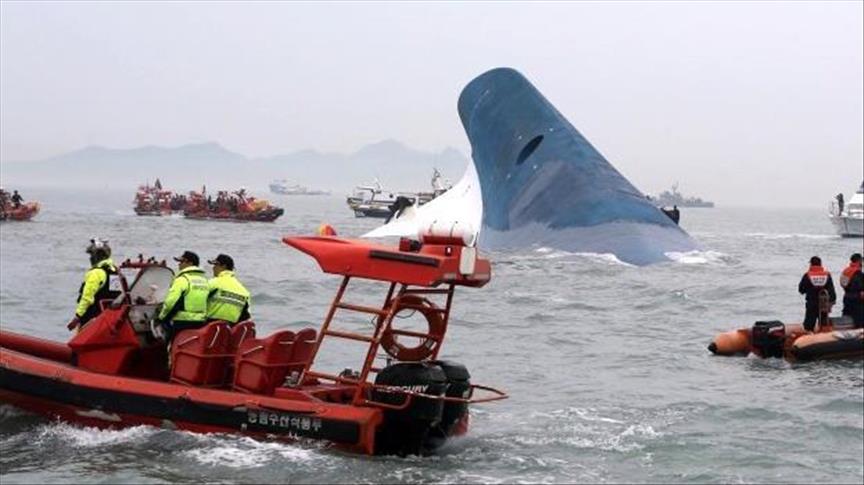 South Korea's disaster-struck Sewol ferry was brought above water for the first time in nearly three years Thursday, raising hopes of recovering the bodies of nine victims still unaccounted for.

More than 304 people lost their lives when the 6,825-ton vessel overturned and sank in waters off the southwest of the peninsula on April 16, 2014 -- the tragedy was made all the more painful as most of the dead were high school students.

After years of consultations and bidding by salvage operators, efforts to retrieve the Sewol began Wednesday thanks to favorable weather.

Grieving relatives looked on as part of the ship broke the surface shortly before 4 a.m. Thursday (1900GMT), having been raised from its resting place 40 meters (131 feet) below.

"I was heartbroken looking at the rust and corrosion," reflected Lee Woo-geun, who lost his son to the disaster, according to local news agency Yonhap.

Another parent, Kim Sung-sil, was quoted as saying the recovery of missing passengers is "the most important thing”.

"Thereafter, a thorough investigation should be conducted on the vessel to find out the cause of the sinking," Kim added.

It is expected to take around 12 days to move the Sewol onto a dry dock for a full investigation, according to a government spokesperson. China's Shanghai Salvage is leading the $76 million project.

Such was the impact of Thursday's development that presidential frontrunner Moon Jae-in delayed announcing his bid to run in May's snap election.

The maritime disaster has become a major political issue in South Korea, where ousted President Park Geun-hye is blamed for failing to act appropriately on the day of tragedy.

Sewol Captain Lee Joon-seok was sentenced to serve 36 years in prison after abandoning the ship before evacuating hundreds of passengers, among more than a dozen convictions related to the sinking.