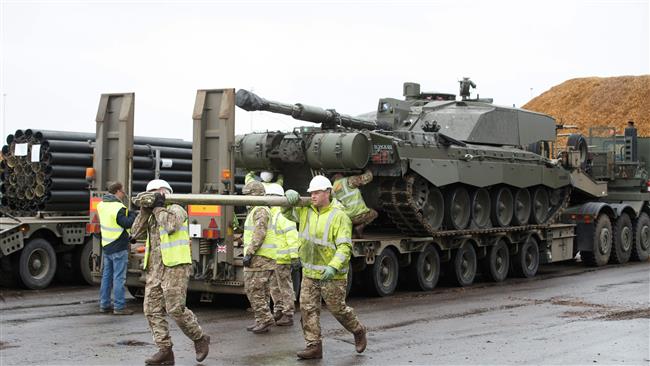 The first group of British tanks and armored vehicles has arrived in Estonia, part of a broad military deployment by the NATO military alliance to Eastern Europe to deter “Russian aggression.”

The armored convoy of 130 units, including Challenger 2 tanks and self-propelled guns, disembarked at the Paldiski seaport in northern Estonia on Wednesday and was slated to join the 200 British troops and 50 French soldiers earlier deployed to the town of Tapa.

“This is the start of one of the biggest deployment in Eastern Europe since the Cold War and by the end of next month, we will have 800 British troops, with armor, with tanks, ready to help reassure our allies and to underline our commitment to the security of Europe,” British Defense Secretary Michael Fallon said in a statement.

“British troops are playing a leading role in Estonia and supporting our US allies in Poland, as part of wider efforts to defend NATO,” he added.

On Friday, Britain sent its first group of troops to Estonia. The 120 British soldiers are part of a total of 800 British troops to be stationed in the Baltic State.

In July 2016, the US-led military alliance decided to deploy an Enhanced Forward Presence force to the Baltic States—Estonia, Lithuania and Latvia—as well as Poland, following Russia's reunification with Crimea.

Under the current plan, over 800 British troops and nearly 300 French troops are expected to be stationed in Estonia and form one of the four battalions the NATO is putting together near Russian borders.

The French troops stationed in Estonia would be replaced by a Danish contingent later this year. A group of French armored vehicles had already arrived in Estonia over the past days.

“The arrival of British and French armored vehicles, alongside the men and women of the enhanced Forward Presence Battlegroup is hugely exciting. We look forward to integrating into the Estonian Defense Force and training alongside 1st Infantry Brigade within a matter of weeks,” said Colonel Mark Wilson, commanding officer of the UK’s 5 Rifles Battlegroup.

Britain and other members of NATO have been deploying weapons and equipment on Russia’s western borders since 2014, when the strategic peninsula of Crimea joined Russia after a referendum.

In January, the US military began the deployment of hundreds of combat vehicles such as tanks and artillery guns along with 3,500 troops to Germany.

Earlier this month, military chiefs from Russia and the Western alliance held their first high-level contact after NATO unilaterally froze ties with Moscow over the crisis in Ukraine.