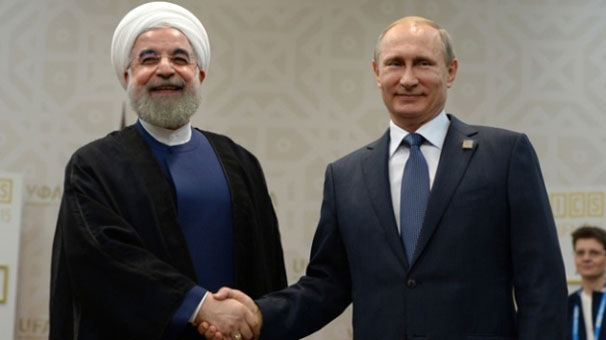 The joint actions of Russia and Iran made it possible to establish the ceasefire regime in Syria, Russian President Vladimir Putin said Tuesday.

Axar.az reports that the Russian president said that Moscow and Tehran agreed on the importance of cooperation in the fight against international terrorism.

"It was possible to establish the regime of cessation of hostilities and extend it to a significant part of Syria largely thanks to our joint efforts," Putin said after negotiations with Iranian President Hassan Rouhani.

The Russian president said that Moscow and Tehran agreed on the importance of cooperation in the fight against international terrorism.

According to the president, Russia and Iran are coordinating their actions to eliminate Daesh and Fatah al Sham (former al-Nusra Front) terrorist groups.

"The participation of Russia and Iran alongside Turkey in the Astana talks between the Syrian government and armed opposition as guarantor states contributes to the further promotion of peaceful political settlement in Syria, facilitates intra-Syrian talks and a corresponding process under the aegis of the UN," Putin said.

Kazakhstan's capital city Astana hosted three rounds of talks on Syrian settlement brokered by Russia, Turkey and Iran, held on January 23-24, February 15-16 and March 14-15. During the talks, the participants agreed to set up a ceasefire monitoring group, among other points.

"The presidents of Russia and Iran, stressing the need to counter terrorism, including by focusing global efforts on the prevention of violent extremism, welcome the adoption by the UN General Assembly of the resolution 'World Against Violence and Extremism'," the statement said.
Meanwhile, Rouhani said that Iran and Russia are calling for continuation of the fight against terrorism.

"At today’s meeting, we discussed regional issues, we discussed peace and stability in the region. We discussed the establishment of closer and deeper relations between our peoples, between the regional countries, we expressed concern which exists in relation to Syria and Yemen. We also discussed cooperation and interaction which we are leading in the fight against terrorism. We shall continue this struggle until the end of all terrorist activities in the region."

The talks on Syria in Astana, whose guarantors are Moscow, Tehran and Ankara, will continue, Rouhani added.