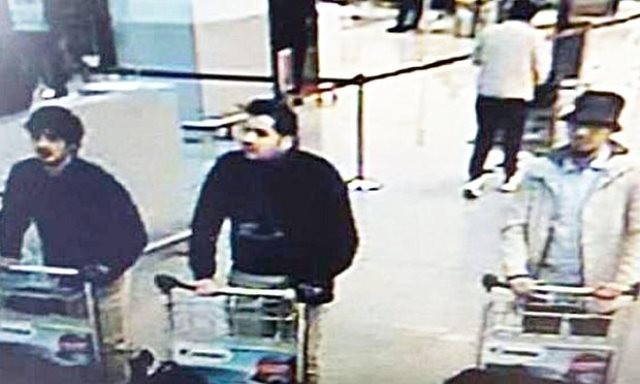 Two brothers have been identified as the suicide bombers who blew themselves up in a Brussels airport yesterday as a third suspect believed to be the chief bomb maker is revealed as an accomplice Paris attacker of Salah Abdeslam.

Khalid and Brahim El Bakraoui were already known to Belgian authorities, according to Belgian media.

Belgian police have also named Najim Laachraoui as the third suspect and chief bomb maker who fled the scene after the deadly blasts.

Laachraoui is also suspected of being an accomplice of Paris terrorist Salah Abdeslam who was arrested last week.

Khalid is suspected of having used a false identity to rent an apartment in the Brussels district of Forest.


Khalid and Brahim El Bakraoui, aged 27 and 30, were already being searched for by police, according to Belgian newspaper DH.

It has emerged Belgian police have been searching for the El Bakraoui brothers for a week.

One brother was being pursued for terrorism offences, the other for a detention sentence.

It is believed they could have been the two men who fled an apartment in Forest that was raided by Belgian police last Tuesday.

The three terrorists were reportedly driven to the airport by a taxi driver, who said the men had three luggage items.

The taximan's tipoff to police sparked a mass search of the airport for a third explosive, which was destroyed after it failed to detonate.

The taxi driver also took the terrorists to an apartment in the Brussels district of Schaerbeek where an Islamic State (ISIS) flag and an explosive device was found by police yesterday.

Two suicide blasts in Zaventem airport and another two explosions in Maalbeek metro in central Brussels have claimed the lives of 34 people and injured more than 200.


In 2010 Brahim was convicted in Brussels for shooting at police officers with a Kalashnikov.

Laachraoui is Europe's most wanted man after being suspected of playing a role in the Paris attacks and the Brussels bombings.