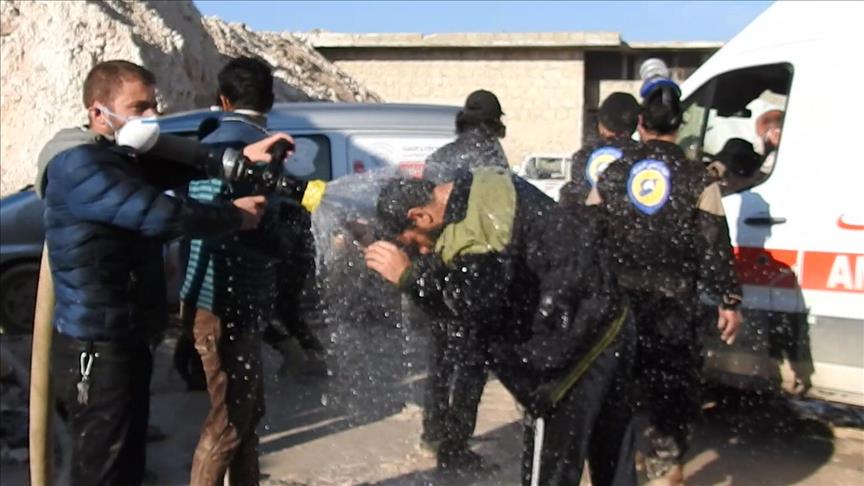 Turkey has dispatched 30 ambulances from the southern border province of Hatay to Syria's Idlib following the recent chlorine gas attacks in the northwestern province, according to a local government official on Tuesday.

The fully equipped ambulances were dispatched at the request of the Syrian opposition fighters, the official said on condition of anonymity due to restrictions on speaking to the media, adding some of the injured would be transferred to Turkish hospitals.

More than 100 civilians were killed and 500 others, mostly children, have been affected in Tuesday's chlorine gas attack carried out by regime warplanes in Khan Shaykun town in Idlib, the Syrian interim government's health minister, Firas Jundi said.

The attack came one day after a regime aircraft carried out a similar chlorine gas attack on Al-Habit town in Idlib, affecting dozens.

Last year, a UN-appointed investigation panel found that chemical weapons were used by regime forces and opposition fighters in 2014 and 2015. However, no actionable steps were taken.

Chlorine gas is one of several elements and compounds used in devastating chemical attacks, outlawed by international treaties. High level of exposure to the gas can cause suffocation as the chemical injuries in the pulmonary airways result in severe fluid buildup in the lungs, with children and seniors particularly vulnerable.

Since March 2011, the Syrian opposition has demanded an end to more than 44 years of Assad family’s rule and the establishment of a democratic state.

The Syrian regime responded to the protests with military force, pushing the country into a vicious downward spiral of violence, bloody battles and a civil war that is still ongoing between the regime and opposition forces.

Since then, more than a quarter of a million people have been killed and more than 10 million displaced across the war-battered country, according to the UN.

The Syrian Center for Policy Research, however, puts the death toll from the six-year conflict at more than 470,000 people.