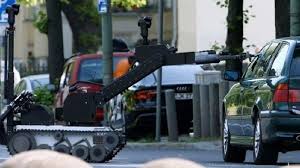 A man has been arrested after bomb disposal experts were called out to suspicious car found with “cables” and a fuel canister near a day-care centre in Berlin.

Police shut a main road after cables and a petrol can were spotted laying on the back seat of a BMW estate.

Residences in the street were evacuated and traffic was diverted as a bomb disposal squad arrived on the scene.

A remote control robot was then deployed to smash the window.

A bomb disposal specialist then approached the car.

Police say the suspect car was recently reported as stolen.Shops, cafes and a nearby Lidl supermarket were cleared and people asked to stand behind a cordon.

An event commemorating what would have been John F Kennedy's 100th birthday is set to be held nearby.

In 1963 the then-US president visited the city - which was divided in two by a newly constructed wall - where he gave his famous “Ich bin ein Berliner” speech.