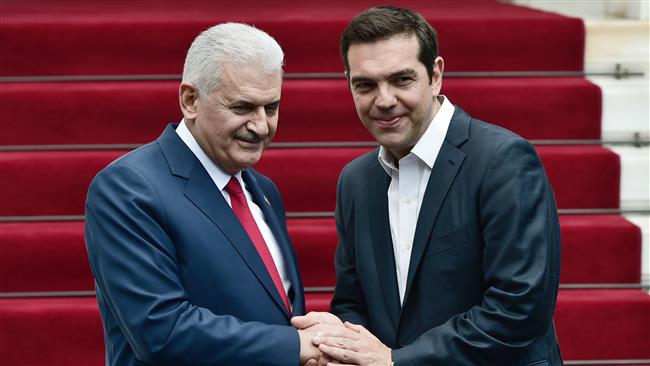 Greece's prime minister has told his Turkish counterpart that airspace violations over the Aegean must stop as they increase the risk of a military accident in the sea between the two uneasy neighbors and NATO allies.

Greek Prime Minister Alexis Tsipras said he and Turkish counterpart Binali Yildirim, who was on a one-day visit to Greece, agreed to maintain open channels of communication between them in an effort to reduce potential military tensions arising from airspace violations.

The two countries have come close to war three times in the past half-century. The most recent time was in 1996, over who owns a couple of uninhabited islets in the eastern Aegean Sea.

Greece and Turkey stand far apart on many fronts, including Aegean boundaries, undersea exploration rights and the war-divided island of Cyprus, which is split between Greek-Cypriot and Turkish-Cypriot communities.

Athens also says Turkish fighter jets frequently infringe the airspace under its civil aviation control, and often violate its national airspace. Both air forces have lost planes and personnel in accidents during fierce simulated dogfights over the Aegean in which the pilots, although often flying armed aircraft, refrain from using their weaponry.

"I stressed to Mr. Yildirim that this situation isn't helping at all, and that these infringements cannot continue," Tsipras said during joint statements to the media after the two men met for talks. "(They) increase the risk of an accident, which I honestly believe is the last thing either side wants."

Yildirim said Greece also engaged in violations and flyovers in the Aegean Sea.
"Of course these are not one-sided. The violations are mutual," Yildirim said. "Of course, the point is that the tension should not escalate. Our quick and direct contact will help to resolve tensions at an early phase.

"Another source of tension between the two neighbors recently has been the fate of eight Turkish servicemen who sought asylum in Greece following last year's failed coup in Turkey. Ankara says the helicopter crewmen had participated in the coup, an accusation the men deny.

Greece's high court has refused to extradite the eight, who claimed they would not face a fair trial in Turkey amid a widespread post-coup-attempt crackdown that has seen about 50,000 people arrested and more than 100,000 suspended from their jobs.
Asked about Greece's refusal to extradite the servicemen, Tsipras noted that his country's judicial system was independent of its political system.

"We respect the decision the judiciary has made but we hope the coup-plotters don't deliver a blow to Turkey-Greece relations," Yildirim said.
Referring to who should exploit suspected large natural gas deposits in the Aegean and off Cyprus, Yildirim said these energy sources are "the common heritage of all humanity."