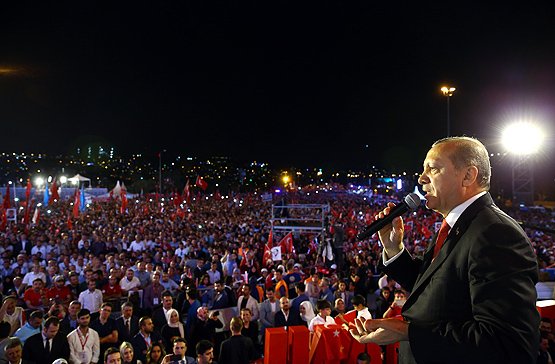 President Recep Tayyip Erdogan thanked on Sunday Turkish people for their firm stance against challenges in 2017, vowing Turkey will pursue a more active foreign policy to find solutions to regional problems, in a video message published due to the new year.

Erdogan recalled that 2016 was overshadowed by PKK's terrorist acts and the July 15 coup attempt by FETO, but Turkey solved terrorism problem with counterterrorism operations in the country and cross-border Operation Euphrates Shield in 2017.

Turkey launched Operation Euphrates Shield on Aug. 24, 2016, with Free Syrian Army (FSA) elements, which was initially meant to clear the border of the threat of terrorism from İSİS and the PKK terrorist organization's Syrian affiliate Democratic Union Party's (PYD) armed People's Protection Units (YPG). The operation ended in March 2017, achieved its objective of driving out İSİS and managed to force the YPG to withdraw east of the Euphrates River, except for Afrin and Manbij.

Erdogan said he made 64 visits to 51 cities throughout the country in 2017 as President of the Republic of Turkey in 2017, stating that he strives for embracing with citizens in every opportunity.

"We tried to represent our country in the best possible way in the international arena," Erdogan said, referring also to his 34 visits to 25 countries during the year.

Commenting on the controversial decision by the U.S. President Donald Trump on recognizing Jerusalem as Israel's capital and the events followed afterward, the president added the Jerusalem issue is a test for all the Muslims around the world.

"Jerusalem issue has turned into a new test for Muslims and the oppressed people around the world, alongside our nation and the region," he stated.

"I offer my gratitude to my people for their firm stance and sincere attitude on the issue," the president added.