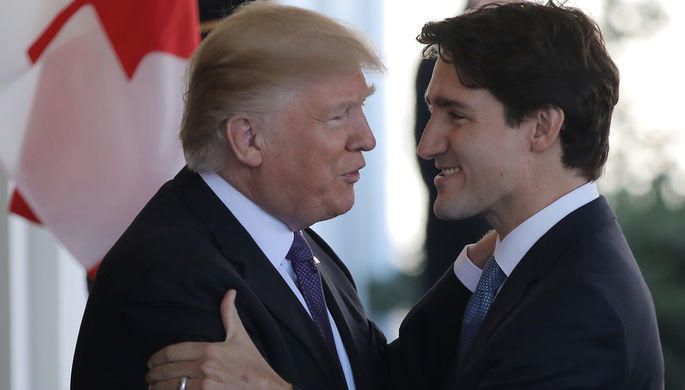 Canadians have reacted with dismay to reports US President Donald Trump questioned whether Canada burned down the White House during a call with the country's leader, Justin Trudeau.

British forces did set fire to the presidential residence during the War of 1812 with the US.

But Canada did not exist at the time - it was made up of British colonies.

"Didn't you guys burn down the White House?" Mr Trump reportedly asked in a call with Mr Trudeau over new tariffs.

It is not clear if the comment was intended as a joke, but CNN report that it followed an exchange in which Mr Trudeau asked how the US could justify the tariffs as a "national security" issue.

The US imposed tariffs on steel and aluminium imports from its allies - the EU, Canada and Mexico - last week.

"It is simply ridiculous to view any trade with Canada as a national security threat to the US," Mr Trudeau has said of the move.

"Look on the bright side: At least [Trump] knows what the War of 1812 is and that during it, someone burnt down something," one user wrote.

New York Times correspondent Glenn Thrush joked that "some young Republican researcher is Googling frantically to see if any British-Canadian units did in fact participate".

Others suggested sparing a thought for the historians who may be inundated with media.

Image captionThis undated drawing shows the burning of Washington, DC, with the White House in the background

The White House was set on fire by British forces in 1814 during the War of 1812 with the United States.

The reasons for the war included US frustration at the British forcing American merchant sailors into the Royal Navy, as well as trade restrictions on the US.

Another factor was British support for Native Americans as they fought against the US government's westward expansion.

British troops led by Maj Gen Robert Ross attacked and burned public buildings including the Capitol, Washington Navy Yard and the president's mansion during the conflict.

It was the only time that a foreign power has captured and occupied Washington.