Trump: "Are you still a believer in Santa?" 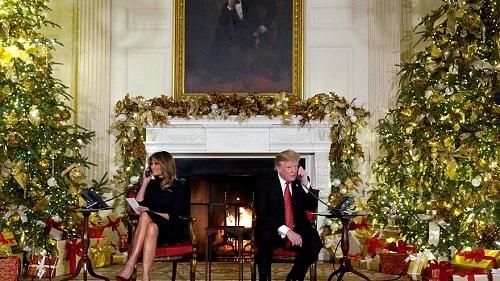 Seven-year-old Coleman was really anxious to know where Santa was on Christmas Eve.

To find out, the eager American boy called the North American Aerospace Defence Command (NORAD), which tracks Father Christmas on his worldwide gift delivery round.

It's a mission NORAD has solemnly carried out without fail for the past 60 years, and not even a government shutdown could put a stop to it.

But Coleman got an early surprise when he was put through, not to Santa, but the US President himself, Donald Trump.

Trump asked him: "Are you still a believer in Santa? Because at seven, it's marginal, right?"

Coleman's answer, however, brought a smile to the president's face, who cheerily replied: "Well, you just enjoy yourself."

The President and his spouse traditionally answer some of the calls on Christmas Eve.

For First Lady Melania Trump, the annual event "is becoming one of my favorite traditions".