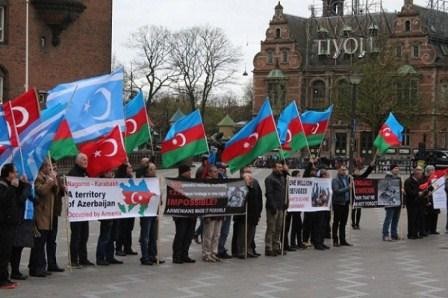 Members of the Azerbaijani community in Denmark have held a rally in Radhus Plads square in the centre of Copenhagen in order to support the Azerbaijani national army in the wake of recent events on the line of contact between the Armenian and Azerbaijani troops.

After Azerbaijan's national anthem was played, the rally participants observed a minute's silence to commemorate servicemen and civilians who were killed by the Armenian military units.

Highlighting the recent escalation of tension on the frontline, the participants briefed the local community on Armenia`s policy of occupation and terrorism against Azerbaijanis.

The rally participants noted that the occupation of 20 percent of Azerbaijani lands by Armenia and more than 1 million Azerbaijanis` becoming refugees and internally displaced persons was a gross violation of international law. "Armenia ignores the UN Security Council`s four resolutions which demand unconditional and immediate withdraw of the Armenian armed forces from the Azerbaijani territories," they said.

Chanting slogans in support of Azerbaijan, the event participants condemned the military operations carried out by the Armenian armed forces which resulted in the killing of civilians.

Representatives of Turkic diaspora organizations based in the Northern European region also attended the rally.