Jordan`s position over conflict is unchangeable 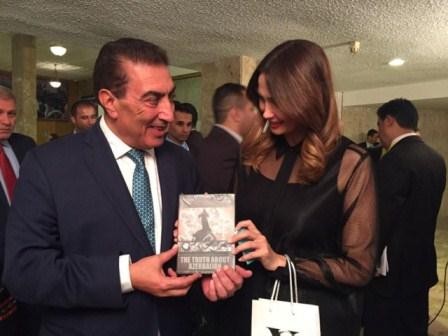 Jordan`s position over the Armenian-Azerbaijani conflict as well as Khojaly genocide is remains unchanged, said Speaker of the country`s House of Representatives Atef Tarawneh as he met with Azerbaijani MP Ganira Pashayeva on the sidelines of the Women in Parliaments Global Forum.

He hailed the development of relations between the two countries, and stressed the importance of expanding cooperation.

Pashayeva noted that Jordan was a fraternal country for Azerbaijan. She said the Azerbaijani people hailed Jordan`s just position on the Armenian-Azerbaijani Nagorno-Karabakh conflict.

“Azerbaijan has always attached importance to developing relations with Jordan,” the Azerbaijani MP underlined. She hailed the Jordanian Senate`s adopting documents recognizing Khojaly genocide and condemning Armenia`s barbarism against humanity. She noted that Azerbaijan supported Jordan in all international platforms.

Pashayeva highlighted the current state of the Armenian-Azerbaijani Nagorno-Karabakh conflict, and spoke of Armenia`s military provocations in the region.