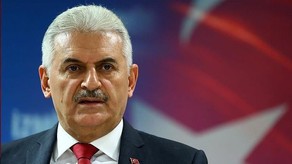 Turkish Minister of Transport, Maritime and Communications Binali Yildirim has been announced as a candidate to the post of the country's prime minister.

According to the Turkish media, it was declared after a meeting of ruling Justice and Development Party (AKP) Central Executive Board on May 19.

According to the information, most of AKP MPs and ministers supported candidacy of B.Yildirim to the post of prime minister.

Notably, AKP will held extraordinary congress on May 22. In the event, B.Yildirim's candidacy for the party chairman and prime minister will be approved.

After the meeting of Executive Board, B.Yildirim left for Diyarbakir.

Notably, Davutoglu, who resigned from the post of prime minister, has also attended the meeting. He wished success to B.Yildirim in his future activities.