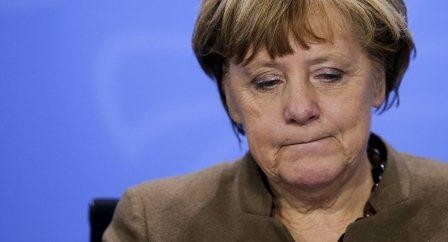 Backlash against immigrant policy raises questions on whether chancellor will stand for a fourth term next year.

The anti-immigrant party Alternative for Germany (AfD) gained support, capitalising on anger over Merkel’s open-door refugee policy that has allowed one million asylum seekers into Germany, with 70,000 of them coming to Berlin.

AfD, which has campaigned heavily on the refugee issue, managed to garner 12.2 percent of the vote and will enter its tenth regional assembly of the country's 16 states.

CDU's coalition partner, the Social Democrats (SPD), also lost support, falling to 23.1 percent from 28.3 percent but remained the biggest party and is likely to ditch Merkel's party from their current coalition.

The Social Democrats, Merkel's junior coalition partner at the federal level, may strike deals with Greens and the Left party, each of them getting 16.5 percent of the vote.

A backlash against the chancellor's immigrant policy has raised questions about whether Merkel, Europe's most powerful leader, will stand for a fourth term next year.

"There is no question, we didn't get a good result in Berlin today," said Michael Grosse-Broemer, a senior CDU lawmaker said. However, he blamed his party's historic losses in Berlin primarily on local issues.
"I think it is dangerous to transfer the Berlin result to the federal level," he told broadcaster ZDF.

The election in the chronically indebted city-state of 3.5 million people was dominated by many local issues including poor public services, crumbling schools, late trains and a housing shortage, as well as how to cope with the migrant influx.

Nonetheless, the vote marked another milestone for the upstart AfD, which has campaigned on a xenophobic platform - similar to France's National Front and far-right populists in Austria and the Netherlands - and gained support especially in Berlin's poor eastern districts.

"From zero to double digits, that's unique for Berlin. The grand coalition has been voted out - not yet at the federal level, but that will happen next year," said AfD candidate Georg Pazderski to cheering supporters after the results.

Berlin's SPD Mayor Michael Mueller warned on the eve of the election that a strong AfD result would be "seen throughout the world as a sign of the resurgence of the right and of Nazis in Germany".