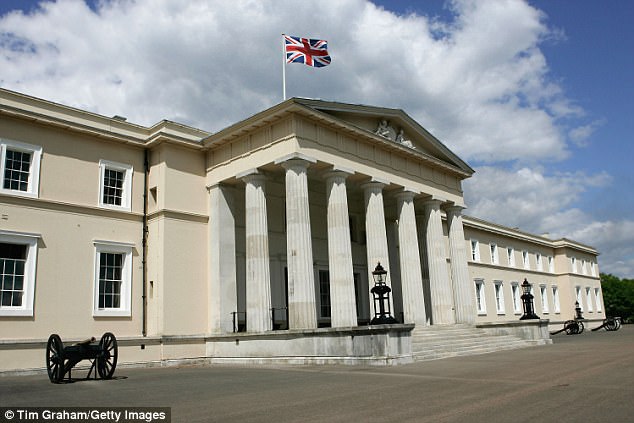 A British soldier training to become an officer at Sandhurst has been photographed holding a machine gun to a man's head in a sick mock ISIS execution.

The photographs show Private Robert Stewart, 20, pointing an AK-47 at a man who is kneeling on the floor with a balaclava covering his face.

Army chiefs have now launched an investigation after seeing the images which were posted on social media by Pte Stewart.

He uploaded the pictures of him standing with the replica weapons and wrote online: 'Captured a rare Gurkha worth 100 points. Do not show anyone.'

The shocking image is reminiscent of video clips and images of infamous ISIS executioner Jihadi John, reports The Sun.

Pte Stewart, who is based at Sandhurst, Berkshire, was taking part in Exercise Dynamic Victory in Germany when he posed for the photograph.

He was learning to become an officer on the 44-week course in Hohenfels - 90 miles north of Munich.

The paper reports that a friend said that Pte Stewart, from Newcastle, had been 'bragging' about the photograph and said he found it 'funny'.

They said: 'It's immature and offensive. He's joking around about terrorism. He finds it funny. It's wrong.'

Pte Stewart serves in the Royal Logistic Corps and told the paper that he 'better speak to his bosses' when he found out the photographs had been leaked.

An Army spokesman said: 'We are aware of an incident involving soldiers posing with replica weapons. We expect the highest standards of behaviour, whether on or off duty.

'Any breaches of values and standards are treated very seriously and are dealt with administratively and may face sanctions including dismissal.'

Jihadi John, real name Mohammed Emwazi, 27, was killed on November 12 last year after US intelligence established where his wife and child were living in Raqqa, Syria.

The Londoner was 'evaporated' by a drone strike in the city.

ISIS paid tribute to Emwazi - once the world's most wanted man - in a bizarre obituary that praised him as an 'honourable brother' and highlighted his 'enthusiasm'.