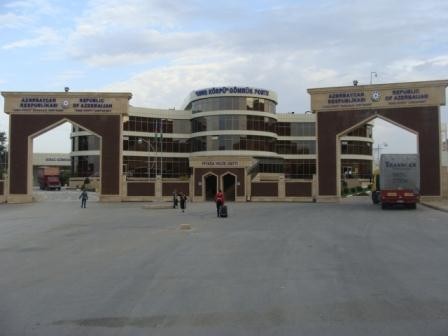 Transportation of goods through the Azerbaijani-Georgian border will be greatly accelerated, UN Resident Coordinator in Azerbaijan Ghulam Isaczai told reporters May 5.

Isaczai is taking part in a conference in Baku dedicated to the 'Support to the development of the Red Bridge Border Crossing Point between Azerbaijan and Georgia' project.

'Support to the development of the Red Bridge Border Crossing Point between Azerbaijan and Georgia' is a joint project of the UN Development Programme and State Customs Committee of Azerbaijan. The project worth $3 million will be financed by the EU.

The project is multifunctional, and one of its main goals is security on the border between Azerbaijan and Georgia, protection of the quality of goods, and the infrastructure of the border crossing point will be improved for that, Isaczai said.

In addition, special training of personnel will be conducted for customs officials of the two countries, he added.

He said that this project is very important both for Azerbaijan and Georgia, as well as the European Union (EU).

This project will bring together the two countries with Europe, enabling them to further integrate into Europe, said Isaczai.

In turn, Head of the EU Delegation in Azerbaijan Malena Mard told reporters that the project is planned to be completed within two years.

The EU has allocated 2.7 million euros for the project, of which 1.8 million euros have been allocated to Azerbaijan, Mard said, adding that she thinks this project is very important for the EU as well, since this corridor is part of the Silk Road through which goods are transported from Asia to Europe.