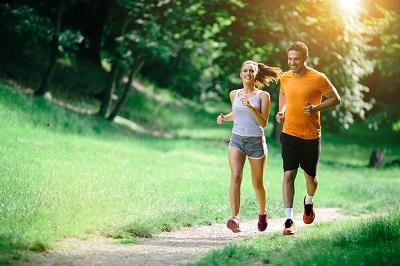 Go outside and get some fresh air! It's something our parents told us to do as kids, and it could be just what the doctor ordered for a workforce that spends most of the day sitting and staring at screens. One way to do it: Get out of that stuffy fluorescent-lit conference room, get on your feet, and take that work meeting into the great outdoors.

Walking meetings provide a chance to add bonus exercise (and steps, to those of you who are counting!) to your workday. And if you can do them outside, even better. Exposure to nature is a great way to get a head-clearing, stress-busting mental boost, as well.

"A lot of folks often say they don't have time after work to go to the gym or exercise," said Dr. Alberto Caban-Martinez, who helped conduct a walking meeting pilot study for the University of Miami's Miller School of Medicine. "One of the things our pilot study showed is that converting some of the time you're at work into a walking meeting is really beneficial to cardiovascular health and, potentially, even to productivity."

In many industries, productivity depends on creativity and walking meetings might help. Matt Jarvis, CEO of the advertising/creative agency 72andSunny, finds they make a big difference:

"Creativity and innovation really benefit from surprising leaps or lateral thoughts. One of the things that happen when you go outside and walk around, you start to collide with your environment a little bit, and it's a great source of inspiration. I think you're much more creative and expansive out and about than you are staring at a screen."

It's a thought echoed by Richard Louv, naturalist, and author of "The Nature Principle." "A little bit of nature goes further than we think it does. There are studies that show that just 10 or 15 minutes outdoors, walking through a park, there is a measurable improvement in mental attitude and psychological health. We need nature; we need contact with the natural world, even if it's trees around an office park."

A walk in the park has benefits for those no longer working, as well. Another University of Miami study found that seniors living in the greenest parts of Miami had lower rates of chronic diseases.

"We discovered in our research that the presence of green space -- trees, other forms of vegetation -- were associated with lower rates of four different forms of heart disease," says the study's lead author, Scott Brown. "When our parents said 'go outside,' they might have been on to something."