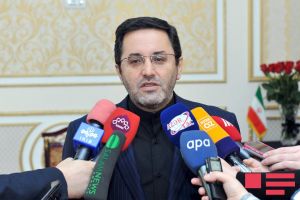 Axar.az reports that Mr Ambassador noted that during the last trilateral meeting of Azerbaijani, Turkish and Iranian foreign ministers, the Iranian Foreign Minister stated that Iran can play a role in bringing the sides together and settlement of the Nagorno-Karabakh conflict.

"Iran is a neighbor with both Azerbaijan and Armenia. Existence of this conflict, of course, has a negative impact on the region. Iran is ready to do its best for the settlement of the conflict. But it depends on the will of the parties to the conflict,” Mr Jahangirzadeh said.